We have not inspected a Moonraker since about 2010, then as the saying goes along come three Moonraker Pre Purchase Inspections in the same year.

This Moonraker was being sold by Anglia Yacht Brokers of St Olaves and was available for inspection out of the water. For those of you who need an inspection (or service) their 50 tonnes gantry / travel lift is most efficient and reasonably priced

The Moonraker inspected was built in 1975 and fitted with 2x Perkins HT 6.354 @ 175hp ea. diesel engines. These engines being the inclined model which from a surveyors perspective makes engine room inspection very difficult as there is very limited space to actually gain access. 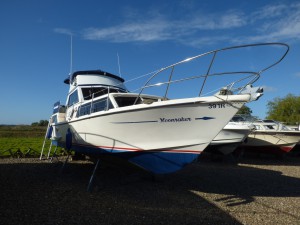 As well as the 3 main types of Moonraker available (Sedan, Cruiser and Sports Yacht, with many variations of these also available) from 1972, coloured hulls were also available, the first being yellow. The ‘D’ series was introduced in 1973, which extended the forward cabin windows so giving greater head/standing room 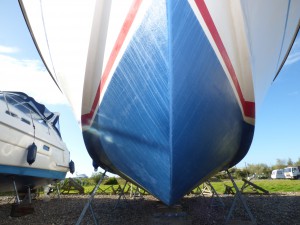 We also undertook engine oil analysis (samples) of both engines the result showing that one engine had a higher degree of wear, which when re-sampled having changed the oil and run for a while returned to acceptable readings. A fairly high number of oil analysis samples that we take give ‘false’ readings consequent of a lack of oil changes over several years allowing the build up of unwelcome deposits

For those of you whom are interested, and to give some idea as to the background of Moonraker Marine / JCL / Colin Chapman & Lotus Cars we have reproduced the history from www.moonrakerboats.com and acknowledge them accordingly ………..