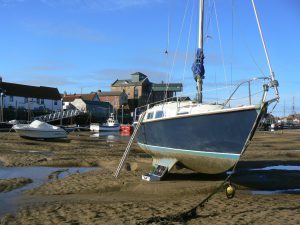 Sabre 27 yacht sitting on twin bilge keels ready for inspection, we had to navigate around the tidal pools of water

EMS undertake Insurance and Pre Purchase Surveys Any Where at Any Time and as per our motto we have recently undertaken a Survey for Insurance Purposes on a small sloop rigged yacht in Wells Harbour, North Norfolk 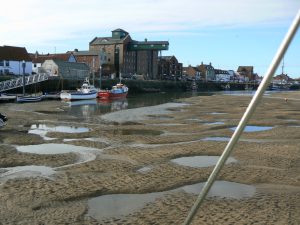 Very pleasant view of Wells harbour and the 1904 granary

However, to reach the yacht which was beached on a sand bar across from the harbour wall, entailed wading across the river – fortunately on a bright and warm Autumn day and at low tide, and walking across sand / dunes to reach the vessel – being berthed on its own twin bilge keels at low tide.

As surveyors (not sail-makers or riggers) we are unable to provide a written report or qualified opinion of standing / running rigging, sails, mast and spars, associated equipment, winches and fittings etc. We do however provide an opinion of all rigging / equipment seen at deck level

The gas installation was found to not conform to current regulations, consequently such as the stove recommended removal the unit being considered unsafe

There has been a port at Wells for over 600 years. The harbour is protected by salt marshes behind a sand bar. Because it is a natural safe haven from the unpredictable North Sea weather the Port of Wells was one of England’s major harbours in Tudor times and a thriving, centre for shipping and maritime industry in the 18th and 19th centuries. Its greatest period of prosperity was probably from 1830 to 1860. The stone quay side was constructed in 1845 following an Act of Parliament the previous year. The coming of the railway in 1857 marked the beginning of decline though there was a resurgence from 1960 to 1989 when coasters bringing fertilizer and animal feed came in some numbers. The Granary with its distinctive gantry was built around 1904;[3] it has now been turned into apartments. The gantry allowed grain to be transferred between the building and ships without disrupting road traffic. The railway closed in 1964 and in 1976, the Wells Harbour Railway was constructed to link the town with the beach 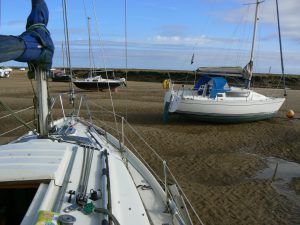