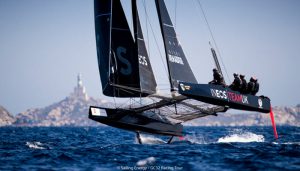 Ben Ainslie and INEOS TEAM UK want to win the America’s Cup – Britain has never won the Auld Mug despite hosting the first Cup in 1851. In fact the famous nautical nation has failed to win in 21 separate challenges over the intervening 167 years.

But with the next America’s Cup taking place in Auckland in early 2021 aboard entirely unique AC75 foiling monohulls, there is no perfect circuit on which teams can train beforehand. As Ainslie puts it: “We have to stay current and we can’t get too rusty.”

Some America’s Cup teams have been keeping themselves race-sharp on TP52 monohulls, but they don’t foil, nor do they offer anything like the righting moment of the AC75s. For Ainslie, he has looked toward the GC32 Racing Tour this season. While it may be a catamaran, the GC32 does offer high speed, air-born sailing as the AC75 will.

“We wanted to compete on a circuit and to get as many guys out on the water as we could. Another consideration was for it not to cost a fortune,” says Ainslie. “The GC32 fitted well. The Extreme Sailing Series has its benefits from a commercial side clearly, but we felt the quality of the racing is much better on the GC32 Racing Tour, which is what we wanted – good sailing and to get the guys doing some competitive racing on foils. It has been everything we’d hoped – brilliant.”

While best known for his singlehanded Olympic dinghies, Ainslie is a past Match Racing World Champion, and was tactician aboard Oracle Team USA when they pulled off the biggest turn-around in sporting history to win the 34th America’s Cup in San Francisco.

Last year he raced in the 35th America’s Cup Challenger series on an AC50 foiling catamaran in Bermuda under the colours of his own America’s Cup team, which has since become INEOS TEAM UK.

So is learning a new boat like returning to kindergarten? “Sometimes it feels like that. Expectations are obviously high, so sometimes it is frustrating, but if you want to be at the top of something, you need to put the hours in. We are focussed on the Cup and haven’t done the hours in the GC32 and that means we don’t have as much experience as the other teams.”

On board it is not just Ainslie that is new to the GC32 but his crew – mostly seasoned pros and A-listers, cherry picked from other teams that competed in Bermuda; coming with great AC50 experience, but little or none on the GC32.

“We’re just having to learn the nuances of the boat – knowing exactly when you can pop it up on the foils, when you can change modes and make manoeuvres,” says Ainslie. “There is obviously a lot of team work involved and a lot of feel for the boat. We’re just lacking time in it.”

While the AC50s had all manner of complex hydraulic systems to operate the foils, plus a team of grinders perpetually pumping to keep the hydraulics primed, plus an articulating wing to provide the horsepower, the small and substantially less costly GC32 in comparison is a much simpler boat with a conventional mast and softsails and no hydraulics.

You can’t sail it with the same precision, but top speeds approaching 40 knots is still highly respectable from a 32ft boat and having far fewer systems enables the crew to concentrate more on the racing, which is, as Ainslie says, the reason they are competing on the Tour.

The INEOS TEAM UK campaign for the 36th America’s Cup was founded by Chairman of the INEOS group Sir Jim Ratcliffe, who earlier this year topped the Sunday Times Rich List as the wealthiest person in Britain.

Ratcliffe’s support happened suddenly around the same time, after he and Ainslie met up in a pub, having been introduced by a mutual friend. This encounter led to Ratcliffe’s famous quote “I only went for a gin and tonic – it cost me £110m!”

As Ainslie recounts: “He was just keen to meet – I don’t think he necessarily had any massive vision of wanting to do the Cup. We were chatting about all sorts of things, then we got talking about the Cup and it sparked his interest, one thing led to another and as we didn’t know if there was going to be any [America’s Cup] racing this year or next year, from a commercial side it was going to be a tough sell to the sponsors.”

Given that the existing group of private backers and partners that had got Ainslie’s team to Bermuda would be stretched to cover the increased costs of a campaign for the 36th America’s Cup on a brand new type of boat and in New Zealand, Ratcliffe’s arrival, more as a Larry Ellison/Torbjorn Tornqvist-style private campaign backer, was a game changer for the British challenge.

“Jim just thinks it is a really cool project and he enjoys taking on different challenges. His one condition was that if he was going to do it, he wanted to be the sole backer. That was a tough call, but at the end of the day they [the backers – including Sir Keith Mills and Sir Charles Dunstone] all understood that it was going to cost even more and if Britain wants to win it – this would be the best chance, so go for it.”

While Ratcliffe owns a series of superyachts, all called Hampshire (the county in the UK where he resides), he is getting into sailing. “He has been out with us a couple of times now,” says Ainslie. “He was made a member of the Royal Yacht Squadron and before his inauguration we went sailing on the GC32 and did a fly-by with him steering the boat and he took to it brilliantly. He was definitely the first Squadron member to go his inauguration, foiling into the yacht club!”

For now, Ainslie personally is looking for that one position on the GC32 Racing Tour that has so far eluded him at the GC32 TPM Med Cup, the final event of the 2018 GC32 Racing Tour, coming up October 11-14 in Toulon, France.