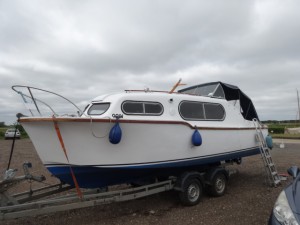 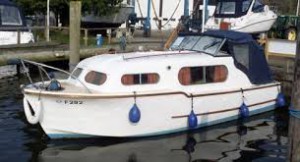 The first 22ft Freeman Cruiser emerged in 1957. By the 1970’s the factory was employing 125 people, building three 23ft and one 26ft cruiser each week and one Freeman 30 every 2/3 weeks. There were 4 or 5 factory lines at a time: It took 25 men to build a single boat. Some 6,000 boats were produced by the time John decided finally to retire, he now lives in France. Incidentally, the last boat to be built was a Freeman 27 in October 1983.

In 1964 the model was changed bringing in the new 22 which is now known as the Mk 2 (hence the previous boat is referred to as the Mk 1). The cabin was raised so that you could walk right through,- the well renowned “step in the deck” was established. As with the 22 Mk 1 there is a narrow beam version of the 22 Mk 2 at 6ft 10″ wide which can also be used on the canals.

We carried out the pre purchase survey of this Freeman 22 Mk2 at Martham Ferry Marina. This GRP motor cruiser built in the 70’s has recently been renovated and had a good feel to it. The good quality of the top coat paint and the added ‘cherry & holly’ floors in the cockpit are parts of creating an enjoyable week-ender boat. The Freeman 22 Mk2 in itself has a nice and simple design with reasonable cockpit and some appreciable space in the cabin. 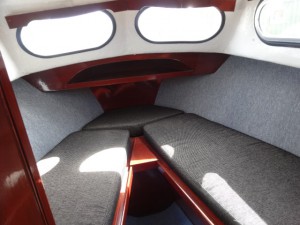 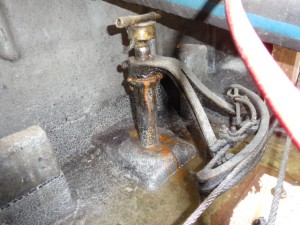 Fitted with a Perkins 4107 diesel engine

The main finding on board was the rudder tube which was leaking. The rudder tube bearing also appeared to be worn out as the rudder post had some movements inside the tube. We recommended checking the steering system for wear and replacing the relevant parts to halt the on-going water ingress.

This is not such a daunting task as it seems as the rudder system is very simple and most yards could put this right.