It is quite common to find that many many vessels have NO auto fire extinguishes permanently installed in their engine spaces etc.  In fact in many small sail boats (per fire boat as below) it is necessary for a crew member to first locate an extinguisher (in the panic and heat of the moment) and then to open a small flap located in the engine hatch and insert the fire extinguisher nozzle and pull the trigger – in the event of a fire ! 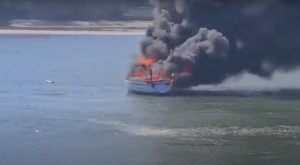 Four people including two children have been rescued from a burning yacht at Conwy Harbour.

The yacht crew had noticed smoke coming from the engine space hatch. After attempting to extinguish it using fire extinguishers, the fire escalated out of control.

The crew raised the alarm and were assisted off the vessel shortly after.

HM Coastguard says the crew managed to escape unharmed with the help of two other yachts in the area and are safe and well.

But, says the RNLI, there was an Easterly breeze, coupled with an incoming flood tide, which subsequently carried the yacht upriver, in the direction of the town quay. Conwy lifeboat stood by, monitored the situation and updated the UK Coastguard as appropriate.

Plumes of thick black smoke could be seen billowing into the sky.

With the fire well established, the vessel drifted onto a pontoon opposite the quay wall and was held against another smaller vessel which also caught fire. Given the billowing smoke, the decision was made to close off the quay.

The Harbour Office’s barge, under command of the Harbour Master, successfully assisted the fire service with transporting firefighters and equipment to help successfully extinguish the fire.

Unfortunately whilst the casualty vessel was being relocated towards the shoreside, it succumbed to its damage, and sank. The secondary yacht which had caught fire was successfully moved to the foreshore, so as to assist the fire service in ascertaining whether the fire was fully extinguished.

A spokesman for the HM Coastguard, told the Daily Post: “At 1.35pm we had a mayday call from a yacht called Osprey, who reported they were next to a yacht on fire.

“They were getting the people from their yacht onto their own and they were assisted by another yacht called Freedom in doing so.

“That was very quick and extremely brave of them – the vessel was quite significantly on fire when they made the call to us.

“They were all very lucky and I have to say my gratitude to those two yachts that rescued them so quickly.

“They really did make a positive contribution to the whole incident and did a sterling job.”

The Coastguard says after the alarm was raised, it broadcast to other vessels in the area to stay clear due to the “significant explosion risk.”

Land units from Llandundo and a lifeboat from Conwy were launched – primarily to work out where the drifting yacht was going to end up.

“In that part of the Conwy river, there’s a strong tidal current and because the tide was coming in, it was pushing the yacht up river, past the marina and down towards the bridge and the town,” the spokesman told the Daily Post.

“In the time it took for the yacht to get there, the gas cylinder did explode and launched itself quite high into the air, which was fairly alarming for everybody.

“But ultimately, because nobody was at risk, other than where this thing was going to land, we decided to let it get stuck somewhere and deal with it then, rather than try and catch it and become stuck to it when an explosion happened.”