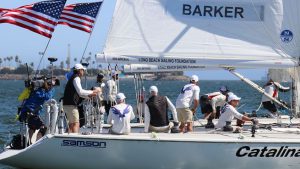 New York Yacht Club American Magic, the U.S. sailing team challenging for the 36th America’s Cup has announced an initial roster of 17 sailors who will train and compete with the team. The accomplished group includes nine Americans and sailors from four other nations. The 36th America’s Cup will take place in March 2021 off Auckland, New Zealand.

“We’re excited to announce the names on our current sailing team and continue the process of building a focused and successful program,” says Terry Hutchinson (Annapolis, Md.) Skipper and Executive Director of American Magic. “Every personnel decision we make in this campaign will be with a single goal in mind, and that is to win the America’s Cup in 2021. With the support of our 90-strong collection of world-class designers, boatbuilders and staff, our sailors will be capable of accomplishing that goal.”

The AC75 class, a new type of 75-foot hydro-foiling boat designed specifically for the next edition of the America’s Cup, the world’s oldest international sporting event, is expected to race with a crew of 11 sailors.

“A major consequence of the decision to return the regatta to cutting-edge mono-hulled boats of this size is that America’s Cup racing has been refocused on sailing skills and teamwork,” says Hutchinson, a 14-time world champion and veteran of four Cup campaigns. “It will take a high level of performance from everyone onboard to get these boats around the racecourse.”

American Magic’s team roster includes the combined experience of 31 America’s Cup campaigns, and three team members are previous Cup winners. Eight American Magic sailors are Olympians, with two medals won, and the roster has earned over 60 world championship victories in various classes. American Magic sailors who are also Olympic hopefuls on the US Sailing Team will be given the flexibility to pursue their campaigns for Tokyo 2020 while operating as part of the America’s Cup team.

“This team roster includes a great balance of proven experience and youth and will help establish the next generation of America’s Cup talent in the United States,” says Hap Fauth (Naples, Fla.), Team Principal and CEO of American Magic.

“Thanks to the efforts of our partners at US Sailing, Oakcliff and other organizations that have supported high-performance sailing, we have capable athletes coming out of Olympic, foiling and development classes here at home. They will help our team win on the water, and also help reengage the American audience with sailing’s pinnacle event.”

American Magic continues to make steady progress on the path towards Auckland, and the team recently opened a dedicated boatbuilding facility in Bristol, R.I. Under the rules governing the 36th America’s Cup, the earliest an AC75 can be launched by any team is March 31, 2019. American Magic is expected to begin sailing their first boat soon after this date and conduct initial testing on the waters of Narragansett Bay and Rhode Island Sound.

“The return of America’s Cup activity to the Newport, Rhode Island area will be a thrilling sight for sailing fans here, across the country and around the world,” says Phil Lotz (Fort Lauderdale, Fla.), the 65th Commodore of the New York Yacht Club. “For 175 years, the New York Yacht Club has been dedicated to moving competitive sailing forward. Defending and challenging for the Cup, a trophy we held for 132 years, has been a large part of the club’s commitment to our sport. We’re proud to return to the America’s Cup arena with this exceptional sailing team.”

“Racing for the America’s Cup is a dream shared by all competitive sailors,” says James Lyne (Granville, Vermont), Head Coach of the team. “American Magic is a once-in-a-lifetime opportunity for our athletes. We are led by a great group of principals, have talented designers, experienced builders, and we are representing New York Yacht Club, with its unmatched America’s Cup history. The stars have aligned to give us this chance to win back the Cup for the United States

The New York Yacht Club’s American Magic founding sailing team reveals a few new faces to the Cup game, along with a few long on experience.