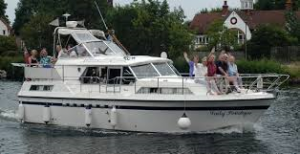 Thank you for your report. I would just like to say how impressed I am with not only with the report but the service and efficiency of yourself and European Marine services as a whole.

I will pay the invoice via bank transfer tonight. Again thank you for your help

Sent from my iPhone

The 35 European is one of the earlier models to utilise the, now classic, Broom layout of forward guest cabin, midships saloon, aft owners’ cabin with en-suite toilet and shower, and the helm on the aft deck. The galley, partly open to the saloon, and a second toilet are between the forward cabin and saloon.

All boats have an internal helm on the port side of the saloon and can sleep from five to seven people, depending on layout variations and the size of the people, with two or three single berths in the forward cabin, two singles in the aft cabin and a single or double on the convertible settee in the saloon. In addition to the door onto the aft deck, the saloon has sliding doors on both sides giving access to the side decks.

Most earlier boats were fitted with twin Perkins H6.354 diesels of either 115hp or 145hp, the latter being turbo-charged, whilst some had 120hp Ford Mercrafts. Most later boats, from 1978(?), were fitted with twin 140hp Volvos which, because they were taller, required the saloon floor to be raised several inches with a consequent change to the saloon roof, which is noticeably more ‘cambered’ on these later ‘Mark 2’ boats.