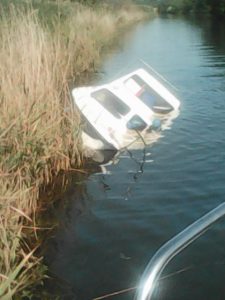 REMEMBER to check and service those fittings below the floors which are not obvious being ………….

In summary the raw water seacock involved fed the engine cooling and was therefore subject to some vibration. It would appear that over time the vibration resulted in the securing nuts etc working loose thus allowing limited ingress of water

This boat was the owner’s treasured possession and though the vessel was old, the owner nevertheless got a lot of pleasure just river cruising and watching the world pass by………..

History – Norman Cruisers of Shaw, Lancashire were a prolific designer of inland cruisers, building a total of 7000 craft. The company founded in the late 1950s went into GRP production in the mid 1960s, starting with the Norman 17.

The business ceased trading in December 1979 (The Winter of Discontent) and started again in 1980. New models were introduced 24, 27 and 22 wide beam but the moulding shop was destroyed in a fire in 1982. This destroyed most of the moulds and the business never recovered. Some moulds were re-built and when the business finally ceased, these were sold and marketed under other names. Also some designs were copied and made into hybrids.

In the 1970s around 65% of boats were exported. Principle markets (in order of Volume) were Holland, Germany, Norway, France, Sweden. Boats in Holland were imported by Internaut of Rotterdam and were sold under the name of “Inter”. Hence the 20 was the Inter620.

Norman Cruisers were in the top 3  largest pleasureboat builders in the UK. Westerley Yachts being the biggest.