Earlier this year EMS undertook a pre-purchase survey, valuation and engine oil analysis – of the above classic Herbert Woods 36 and we felt that a ‘potted history’ would be of interest to our readers 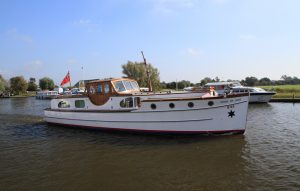 ‘Spot of Light’ along with the rest of the Herbert Woods fleet played an important part in the areas war effort. The fleet was moored on Hickling Broad, rafted together and covered with a tarpaulin to prevent German flying boats from landing. By the end of the war the fleet was in a sorry state, with many of the boats riddled with bullet holes where they had been attacked by fighter planes. So, Herbert Woods began a programme of rebuilding the fleet. During this time, we know that ‘Spot of Light’ had a new transom fitted of beautifully figured Cuban mahogany.  It seems ’Spot’ underwent a further name change in 1947 this time to ‘Shimmer of Light’. It is assumed that this occurred when the boat was recommissioned post war as this is how she features in the 1947 Blake’s holiday brochure. 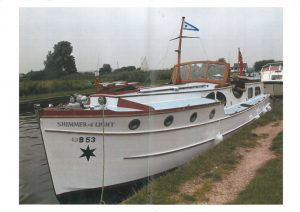 ‘Blakes Catalogue’ 1950’s
In 1951 ‘Shimmer of Light’ was fitted with Herbert Woods newly patented ‘Broads Haven’ Retractable Wheel House. This became a unique feature of all Herbert Woods ‘Light Cruisers’.
Sadly in 1954 Mr Herbert Woods died and Mr Lindsay Cutler took over as chairman of the company. Taking a liking to ‘Shimmer of Light’ Mr Cutler removed her from the fleet and registered her as his own private boat in 1955.
Under Mr Cutler’s ownership ‘Spark of Light’ underwent significant refurbishment. She was painted overall in white, had a new diesel engine fitted, the wheelhouse was fixed so it was no longer retractable, two auxiliary fuel tanks were added to increase her range, davits were fitted to the aft deck so that she could take an outboard dinghy and a ‘Dolphin’ ship-to-shore radio that was installed in the saloon. Internally the boat was refitted with new galley appliances, including a fridge. The saloon berths were made to fold up against the sides of the hull and individual armchairs put aboard. Items like the gate leg table were replaced with a new mahogany one.

‘Thurne Dyke’ 2005
‘Shimmer of Light’ was relocated to Broads Edge Marina in Stalham, it was here in 2011 that she was noticed by Waterside Marine Sales, now part of Herbert Woods. It was clear that she was not being regularly used and, realising the unique opportunity of acquiring the oldest Herbert Woods hire boat afloat, the Partners set out to acquire her. An offer was made to Mr Edwards which was accepted and the boat was returned to Herbert Woods. The boat was immediately renamed ‘Spark of Light’ and a programme of restoration began.