The Ocean 30 also built as the Moonraker 30, were built mainly between 1968 – c 1980 and therefore to conduct a pre-purchase survey on a boat reportedly built early 1991 is unexpected – However the date appears to check out as the engine number is  c 1990 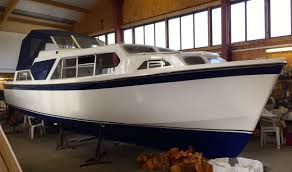 The moulding was by AquaFibre of Rackheath, the semi-displacement round bilge with a long central box keel design by John Bennett – the vessel being rated as an extremely good sea boat.

Herbert Woods of Potter Heigham were the predominant fitters-out until 1975, plus Broom Boats of Brundall and RA Nunn after that. Between 1968 – 1970 Bell Buxton produced the Moonraker 30 based on the Ocean hull. Over 1,000 Ocean 30’s were built. Most can be found on inland waterways but these boats are quite capable of going to sea. 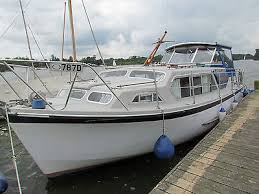 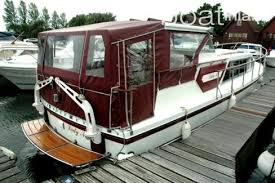 The boat we inspected was an aft cockpit version with a bathing platform, davits, single diesel engine with twin bilge keels – again unusual. An aft cabin version was also produced mainly as a hire boat but the usable deck space (and aft cabin space) in this version is somewhat limited

On our Ocean 30 the following items required attention: