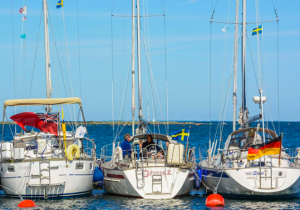 Robin Baron, chairman of the Cruising Association’s RATS committee, says cruising yachtsmen are in the middle of ‘a perfect storm’.

His words come at the end of months of covid restrictions, a VAT ‘trap’ and new visa rules exacerbating everything. Amid a surge of enquiries about Brexit which has seen the CA run a seminar and respond to multiple questions from members in unfolding territory, Baron has settled on a plan to at least help members negotiate visa arrangements. He’s looking to exert pressure from within.

Since 1 Jan 2021, people can only stay 90 days in any 180-day period within the Schengen area (see below). The 180-day reference period is not fixed. It is a moving window, based on the approach of looking backwards at each day of the stay over the time period. Only absence for an uninterrupted period of 90 days allows for a new stay for up to 90 days.

“This simply doesn’t work for cruising yachts,” states Baron. “It cuts off either April and May, or August and September.” But what perplexes him is that while the UK government gave “EU citizens the right to visit for up to 180 days, our government declined to negotiate the reciprocal arrangement with Schengen.”

Baron admits that a few yachtsmen calling for extended visas or equal arrangements is probably quite low on the government’s priority list, but when added to the cacophony of noise being made by musicians and second home owners also pushing back against 90 days, he’s determined that any changes to be made include boat owners.

“My worry is that second home owners – who find themselves in the same position – will lobby successfully to have an extension, but the Cruising Association needs to make sure that any development includes people in boats and that a visa status change isn’t dependent on having a second address,” he says.

With the UK Government so committed to stopping freedom of movement of people, it seems no surprise that the EU’s Brexit negotiator Michel Barnier says the limited 90 / 180 visa result was one of the “inevitable consequences” of Brexit.

“I very much regretted that the British didn’t have more ambition for people’s mobility,” Barnier told reporters, specifically in reply to questions about musicians. That thwarted ambition is now trickling into everyone’s lives.

“From last March, we made fairly ambitious proposals in terms of mobility, including for specific categories such as journalists, performers, musicians and others,” he went on. “But you need to be two to make a deal.”

Now Baron is looking at ways of making a deal happen from within the EU, given the length of the UK Government’s priority list and where yacht owners are placed.

“We’ve selected countries and are working to create groundswell support to add pressure from within Schengen to allow UK yachts to visit for longer periods. We’re trying to raise localised support, from marinas and other marine trades in target countries like Spain, Portugal and Greece. We’re hoping they’ll help pressure their MPs to grant extended visas,” Baron says. “Our inland waterways section is seeking to negotiate with the Netherlands, using locals to provide influence, to try and gain extended visas.”

He recognises that this is a long-shot as “the economic picture of visiting UK yachtsmen doesn’t add up to a ton of money”, but cites Sweden’s extended visa as a good model to start with. According to Baron, several CA members are currently applying for a visa to see how the process works and identify any pinch points.

“We’ll try out the French system when that opens,” he says, “and we’re expecting the Greeks to move swiftly. Theirs is a small economy, but there are a lot of Brits with boats there.”

But while Baron has a route forward – albeit lengthy – with attempts to influence visa changes, the perfect storm is raging. And Baron himself has been caught in a downpour, also known as the VAT trap.

Like thousands of other yacht owners, Baron has found himself in a dilemma. Bring his boat back to the UK and face VAT charges running into the thousands, or leave it where is it (in his case Denmark) and have cruising severely curtailed.

The problem arose from a statement made in spring 2019, when – as Baron explains – HMRC said if a boat owner paid VAT in the EU, it would be treated as if the VAT had been paid in the UK.

“Some people went to Europe and bought boats VAT paid thinking they could bring them to UK with no VAT owing,” says Baron, “as that’s what had been said.

“But in 2020, HMRC did a complete about turn. At the end of the sailing season it announced that if you’d bought a boat in the EU – and it had never been in the UK – and you bring it here, even for a day, you’ll be charged VAT.”

2021 is seen as a grace period for those who have had a boat under the same ownership in the UK and EU to get it back . . . but the boat must have visited UK waters already to be eligible, so that it’s classed as ‘returning’.

Baron says the ‘returned goods’ concept is a simple “cut and paste” from EU legislation which the UK Government has chosen to follow at a point when it had complete freedom to make new rules.

“It [government] didn‘t have to do it this way and most boat owners caught in the trap will simply not return their boats to the UK to the financial detriment of the UK marine industry,” he says.

While the CA’s members campaigned and lobbied their local MPs, the treasury reply was a “standard, bland response which doesn’t address the concerns of some people having to fork out substantial additional sums to bring their boat back to the UK.”

He’s less than sanguine about the government’s response.

“We’re still seeking a meeting with HMRC,” Baron says. “Brexit is down the list behind covid. The cabinet’s bandwidth is completely taken over by covid which is a much more serious problem than a few yachtsmen having to pay VAT.”

But even those who aren’t caught in the VAT trap and who can make use of the grace period are in trouble. “People with boats in the Eastern Med are ‘stuffed’,” says Baron. “Getting back with covid restrictions and the 90 days ruling may very well be difficult.”

He estimates that several thousand boaters are struggling in one or more of the storm’s pathways, but it’s hard to say definitively as he hears people’s anxieties due to restrictions, not their ‘real life experiences’. Baron’s expecting to hear more about that when covid eases and the next barrier to travel arises – insurance.

“Even if we gain an extended visa,” he says, “people will need evidence of health insurance and that will need to cover repatriation costs. That’s going to be another complication as insurance companies are reassessing everything in the light of covid . . . and lots of yacht owners are over 70.”

His final words of advice for any boat owner revolve around paperwork.

“Carry all the documents you can muster,” he says. “We don’t know what the entry requirements will be for each EU port. But I’m confident we’ll get it sorted out.”